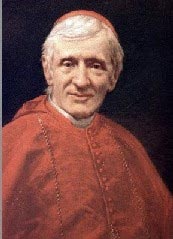 Baptised in the Church of England, Newman became a Fellow of Oriel College, Oxford in 1822, an Anglican clergyman in 1825 and Vicar of the Oxford University Church in 1828.The Anglican Newman was a pastor of souls, a University teacher, and a student of Christian history and theology. His studies were never purely theoretical. Informed by pastoral experience, they were above all shaped by his insight into the needs of the present.

At school he experienced the attractions of atheism, and all his life showed unusual sympathy with religious doubt. But also at school he underwent a conversion granting him an abiding sense of God’s presence. At the same time, Newman acquired the conviction that Christianity is a doctrinal religion, and that doctrine and religious experience are in harmony, not opposed. In Christianity, Newman believed, mind and heart, dogma and experience, come together. With the doctrinal and sacramental faith unfolding in him from his conversion, Newman desired to revive Christianity for a culture descending into unbelief.

In the Tracts For The Times (1833-1841), Newman and his friends in the ‘Oxford Movement’ addressed the Church of England in the hope that it could be renewed in the Apostolic Faith. Gradually, it dawned on Newman that this was impossible. The Church of England could not embrace the truth Newman taught.

1842-5 were his ‘wilderness’ years, out of the public eye, secluded in prayer and study. Living at Littlemore, outside Oxford, he finally embraced the Catholic Church as the ‘One Fold of Christ’ and was received at Littlemore by Blessed Dominic Barberi on 9th October 1845.

Ordained a Catholic priest in Rome in 1847, Newman returned to England with a mission from the Pope to found Oratories of St Philip Neri, in Birmingham (where he lived until his death) and then in London. As an Oratorian Newman founded a Catholic University in Dublin (1851) and a Catholic School in Birmingham (1859). Working tirelessly, especially for the poor parishioners of the Birmingham Oratory, Newman also conducted an enormous correspondence, helping people all over the world with their religious difficulties. Pastorally and educationally, in his published writings and in his correspondence, Newman’s aim was to describe and arouse the Christian mind. His vocation was to help modern people realise the demands of thinking and acting with the mind of Christ and His Church. In 1879 he was made a Cardinal.

The possibility of formal canonization was mooted several times at Newman’s death. However it was not until 1986, that the task of gathering the necessary proofs was completed. In January 1991 Pope John Paul II declared that John Henry Newman had exercised all of the Christian virtues to a heroic degree, and was henceforth to be known as ‘Venerable’.

For Newman to be declared Blessed, a miracle ascribed to his intercession must be recognised by the Church. On 3 July 2009 Pope Benedict XVI recognized, in fulfillment of this requirement, the healing of Deacon Jack Sullivan in 2001. This decision meant that Newman’s beatification could at last take place.

John Henry Newman was beatified by Pope Benedict XVI on 19 September 2010 during his State Visit to the UK.

John Henry Newman was canonised on 13th October 2019. He is the fifth saint of the city of London, behind Thomas Becket, Thomas More, Edmund Campion and Polydore Plasden..